Well here we go. Purchased off from ebay for $44 in June along with 3 others Gang Busters comics (#10,18, and 6). All were graded by CBCS and this issue, #13, was graded 8.0 OW/W pgs. After deciding to break them out for grading by CGC I started this journal to let people know how things were going. CGC has since removed some or all of them I'm told. This issue came back from CGC as a 8.0 white pgs. but with the "Cover Trimmed" note. I was somewhat shock as to how CBCS could have missed this and said so in a couple of the past parts of this journal. It was shortly after that post that W. Stepen of CBCS, a senior grader, got in contact with me by email and said the following- "We noticed an odd cut on the right edge of the comic, but after scrutinizing it, we determined it was from manufacturing, not post-manufacturing. Apparently CGC also noticed the odd cut & came to a different conclusion." He went on in some detail about how comics were made at the time and a bit about CBCS. All in all, a very nice email.

After all of that went down I couldn't wait to get it back from CGC to have a closer look at that right edge. Well, I've look at it now for a week or more and I'm not sure myself if it's been trimmed. I can see where both companies saw what they saw and came to their conclusions. There is a tiny bit of a wave in the cut that may look as if it's been trimmed but it happens at a point where there may have been a fold in the cover before the manufacturing cut and that caused the slight wave on the edge. Knowing that all four book came from the same collection, as they all have the same flowing "M" and a few numbers on the cover, and that none of the others were trimmed, makes me believe that this one wasn't either. But I do see why CGC may think is was trimmed.

I am glad I broke it out so that I can add it to my Registry.

Final words, CBCS seemed like a okay place to talk to and I do like their notes much better than CGC's. CGC only note is that it's a photo cover where CBCS note the actors in the photo cover along with four of the artists and that the story was by Phil Evans. They also tell which stories are in the book on the back label. As for the grade, 8.0 W pgs. I agree. 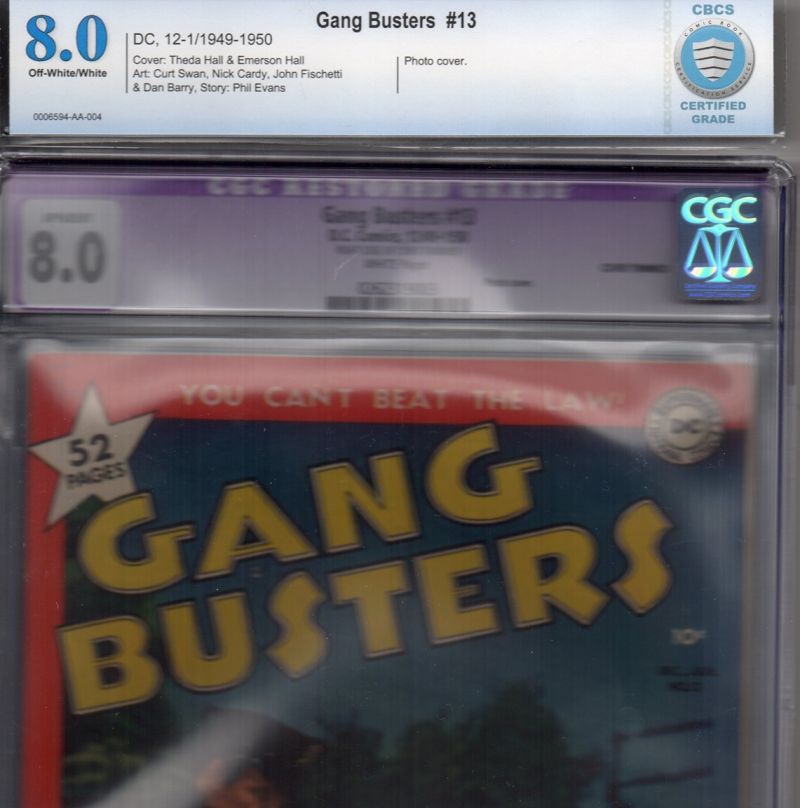 To see old comments for this Journal entry, click here. New comments can be added below.