In July of 1974, writer Gerry Conway and artist Ross Andru introduced us to a new animal-themed supervillain known as the Tarantula! Inspired by the political events that were taking place in South America (especially in Chile) during the early 1970’s, Mr. Antonio "Anton" Miguel Rodriguez served as a revolutionary against dictatorship in the fictional Republic of Delvadia. However, Anton became desensitized to committing homicides and was forced to resign.

As a way to get back at the republic, he became a bounty hunter and joined forces with those he initially fought against. During this time, he developed a battle suit with retractable steel claws in his gloves and spikes in his boots that could smash through hard surfaces and eject poison into his opponents. He called himself the Tarantula and donned a huge black tarantula logo in the middle of his chest to mimic Spider-Man’s suit, but with his ultimate goal of capturing him!

At this point, the Tarantula became obsessed with killing as if it were a hobby, which he ended up assassinating a fellow officer and was banned from the country. He decided to flee South America and made his way to New York City to begin his criminal career, where he encountered both Spider-Man and the Punisher.

Although the Tarantula demonstrated exceptional acrobatic and combative skills in which he even stabbed Spider-Man with his spiked boot, he was ultimately defeated and sentenced to jail. In an attempt to use the Tarantula as a pawn to get back at Spider-Man, the Jackal broke him out of prison, which would eventually lead into The Original Clone Saga in issues #139-#150.

Unfortunately, after injecting himself with the Brand Corporation's mutagenic serum, he developed superhuman powers stronger than Spider-Man’s, but became unstable to the point in which his limbs could not support weight. As a result, in ASM #236, after mutating into a giant-sized tarantula with his mental stability impaired, he committed suicide by jumping off a building and landing onto the street and begging a bunch of police officers to shoot him, which resulted in the Tarantula being gunned down to his untimely death.

Since then, there have been several characters who have taken on the Tarantula identity, which include: Luis Álvarez, Jacinda Rodríguez, María Vásquez and Kaine Parker.

The Tarantula is often considered a Forgotten Spider-Man Rogue, due to his short life span and not having a significant appeal with the readers. However, you never know what can happen if the Tarantula is one day brought to life on the silver screen within the Marvel Cinematic Universe (MCU)!

In terms of the cover art—I absolutely LOVE IT! As I mentioned in my Arachnophobia set description, John Romita Sr. is my favorite Amazing Spider-Man cover artist, and this bright and appealing 1974 battle cover between Spider-Man and the Tarantula does not disappoint! The yellow background with deep reds and contrasting black and blue highlights really POP together nicely! I also love how the two characters are battling on a cargo ship with the Hudson River in the background. The movement captured is superb; Spider-Man is blocking the Tarantula’s arm as he misses his target with his ejected spiked boot shredding into the steel ship! In addition, instead of Spider-Man’s shadow being casted underneath him, you see a shadow of a tarantula, which John Romita drew to emphasize the caption on the lower right-hand corner, “DANGER IS A MAN CALLED TARANTULA!”

UNDER VALUE ALERT! Although most collectors and investors are familiar with the Punisher’s 2nd “full” appearance in the history of comics in ASM #135; his true “2nd appearance” is contained within the last page of ASM #134!

When I think about the reasons why this book has been slept on, it starts to make sense. For starters, the CGC label only notes “Punisher cameo on last page,” without making any reference that it is indeed his “2nd appearance.” In addition, the Punisher is not featured on the front cover, as he is on ASM #135. Therefore, when you combine not having the proper label credit with the character not appearing on the front cover, you can easily understand how this book has gone under the radar!

However, on the front cover, there is a special caption located on the lower left-hand corner that reads: “EXTRA! Don’t miss the shocking return of a SURPRISE super-villain – in this issue’s STARTLING Last Panel!” Furthermore, this caption serves as “code language” that translates to: “The Punisher Returns,” which is actually printed on the cover of ASM #135, although he first returned in ASM #134!

On that note, I believe that it’s only a matter of time until collectors and investors start catching on and placing higher demand to acquire this issue, which will cause its value to SPIKE dramatically! I view ASM #134 having a similar market growth as Incredible Hulk #180, which contains the 1st appearance of Wolverine in a cameo on the last page! For decades, IH #180 was overlooked because like ASM #134, there is no image or mention of Wolverine on the front cover. Moreover, IH #180 was constantly cast in the shadow by the follow-up issue, which contains Wolverine’s 1st “full” appearance in a famous battle against the Incredible Hulk! (Are you seeing the parallels now?)

Over the years, more and more collectors and investors realized the historical value of Wolverine’s 1st true appearance and CGC 9.8 copies went from selling around 6K to 15K almost overnight! Now, IH #180 is considered a highly valued Bronze Age Key and you will have to pay a lofty penny to acquire a high-grade copy!

According to the CGC Census Report as of Tuesday, May 11, 2021, out of a total of 805 Universal copies graded, only 39 copies were graded in 9.8 with 0 copies graded higher! With these statistics in mind, this represents an impressive rarity factor of only 4.84% of the total population!

This stunning copy is WORLD CLASS in every way! It’s PERFECTLY WRAPPED and CENTERED and contains PERFECT WHITE PAGES! I have honestly not seen a nicer looking copy! This blazer has a super tight spine with no visible stresses or color breaks, deep color saturation that looks like it was printed yesterday and perfectly inserted staples! This copy truly looks MINT!

Furthermore, due to portions of the spine containing jet black ink (i.e., the Marvel Comics Strip, the circle behind the Spider-Man logo and on the bottom left-hand corner), which exposes the slightest of defects, finding high-grade copies like this gem will be difficult to acquire.

(SIDE NOTE: The scans captured multiple glares due to the inner well containing multiple ripples; it will eventually be re-encapsulated into the latest generation CGC Holder!)

In closing, I purchased this pristine beauty from monk215 (via eBay) in February of 2021! The transaction and communication went extremely well and I’m proud to showcase this immaculate copy in Arachnophobia! 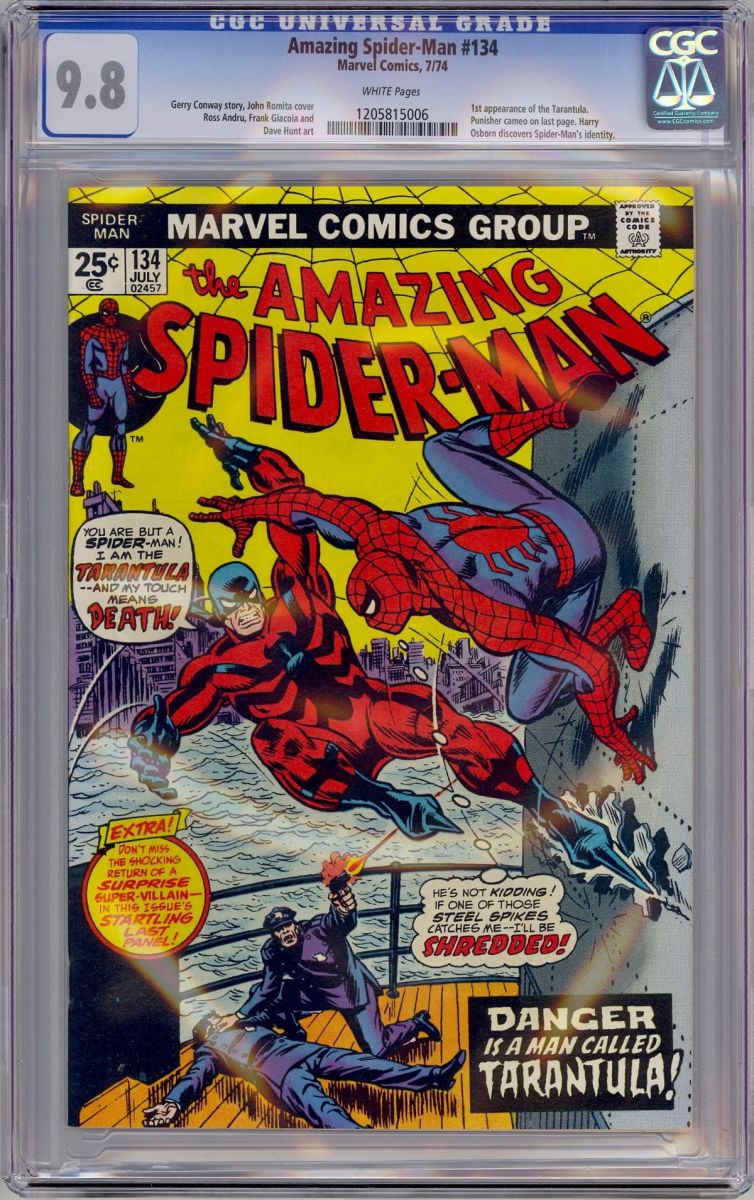 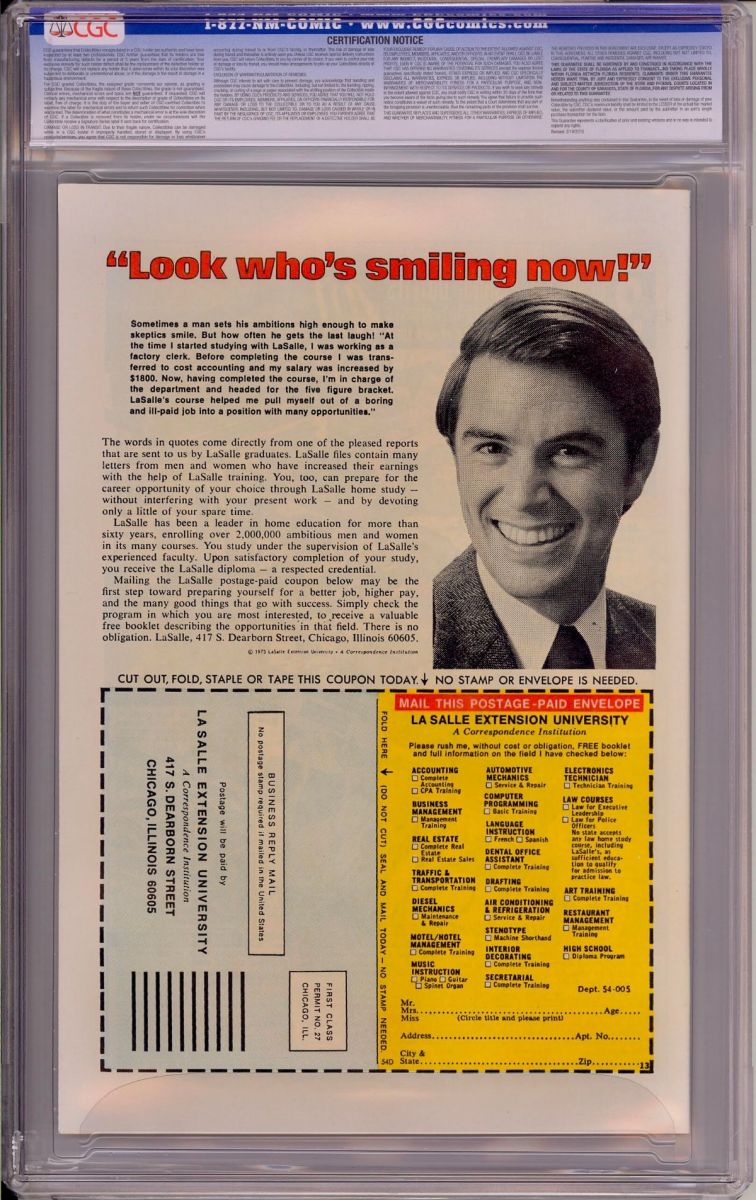