Amazing Spider-Man #129 features the 1st appearance of the Punisher (Frank Castle) and the Jackal!

The Punisher was created by writer Gerry Conway and artists John Romita, Sr. and Ross Andru, with publisher Stan Lee providing the name.

The classic cover art displaying the “Different and Deadly” Punisher was drawn by legendary artists Gil Kane and John Romita Sr. The most lethal hired assassin is featured in his iconic skull-imprinted black suit with an arsenal of weaponry, including an automatic assault rifle in which he is unloading a full clip of ammunition directly at Spider-Man.

The close up view of the Punisher’s sniper scope depicts a defenseless and aerial bound Spider-Man avoiding bullets exploding against the surrounding brick buildings, with cross hairs aimed precisely at his heart! Couple this action on a commanding bright yellow cover, and you have one of the most sought-after and treasured comics in the history of the Amazing Spider-Man title!

Moreover, what made the Punisher truly unique is that although he was originally created as a villain; he was gradually developed into a crime-fighting antihero. It was characters like the Punisher and Ghost Rider (1st introduced in Marvel Spotlight #5 in August of 1972), that would influence the industry in creating more violent and grittier material.

Since the Punisher’s inception in February of 1974, he has starred in 3 feature films. The first Punisher movie premiered in the USA on July 8, 1990 at the Los Angeles Comic Book and Science Fiction Convention, and was characterized by actor Dolph Lundgren.

It wasn’t until 14 years later; on April 16, 2004, in which The Punisher had a reboot and was played by actor Thomas Jane with John Travolta playing the antagonistic character Howard Saint. The setting took place in Florida, which was not true to the comics as Frank Castle’s origins take place in Queens, New York.

The most recent installment, Punisher: War Zone, released on December 5, 2008, was played by actor Ray Stevenson. In addition, actor Dominic West played the Punisher’s arch enemy Jigsaw (William “Billy” Russo), which is true to the comics as Jigsaw was introduced in Amazing Spider-Man #162 and plays a significant and enduring role throughout the Punisher’s storyline.

Unfortunately, none of the aforementioned Punisher films were able to cement the character’s image and brand to the likes of Hugh Jackman playing Wolverine. There were a number of reasons why none of the films gave the Punisher’s character justice; they ranged from inconsistencies in the comics to corny representations of the characters to not finding the “right” actor to emulate and embody the Punisher to perfection.

Fortunately, after decades of failed attempts to portray the character and build a successful franchise, in March of 2016, the Punisher was played by The Walking Dead alum Jon Bernthal (Shane Walsh) in season 2 of the critically acclaimed Daredevil Netflix TV series! Prior to his big screen debut and adding fuel to the hype, Marvel Head of Television Jeph Loeb said in the initial announcement on Marvel.com: “Jon Bernthal brings an unmatched intensity to every role he takes on, with a potent blend of power, motivation and vulnerability that will connect with audiences. Castle's appearance will bring dramatic changes to the world of Matt Murdock and nothing will be the same.”

Since then, the Punisher has been kicking and captivating the audience into his psyche that depicts pain and vengeance amidst his fragmented memories of being a former loving husband and father of two, before they were tragically killed by the mob. Furthermore, on November 17, 2017, the Punisher made his highly successful debut in his self-titled series on Netflix!

Finally, it looks like the Punisher is getting justice on the silver screen! In turn, this has translated into increased demand for high-grade copies of Amazing Spider-Man #129, as the Punisher’s stock has surged!

According to the CGC Census Report as of Tuesday, May 4, 2021, out of a whopping total of 11,635 Universal copies graded, only a mere 143 copies were graded in 9.8 with 0 copies graded higher! With these statistics in mind, this represents an amazing rarity factor of only 1.23% of the total population! That’s pretty rare! Considering the vast number of copies that have already been professionally graded and the fact that many 9.8 copies are stashed away in private collections, it is going to become increasingly difficult to locate pristine 9.8 examples like this gem!

Furthermore, a significant percentage (I would say over 80%) of ASM #129 copies were wrapped at an angle in which you can see part of the white back cover from the front, which is the culprit of most copies displaying the classic Gil Kane and John Romita Sr. cover off-centered. In contrast, there are many copies that do not display any part of the back cover from the front, but if you view the back cover, you’ll notice part of the edge of the front cover on the back. This “miswrap” often displays the “S” in Spider-Man (green font) located on the bottom left-hand corner to be obscured, as well as a part of Spider-Man’s boot near the upper left-hand corner. In addition, there are lots of copies that have a black ink smudge where it reads “The Punisher,” which also takes away from the aesthetic appeal of such a beautiful cover. If you are interested, just browse through all of the current lots and past sales of ASM #129 on eBay and on other various auction houses; you’ll see for yourself that it is very RARE to locate a copy that doesn’t exhibit these manufacturing flaws.

With that in mind, this particular CGC 9.8 copy sports PERFECT COVER WRAP, PERFECT CENTERING, and PERFECT WHITE PAGE QUALITY along with being PERFECTLY CUT! The color saturation is deep and bright and the corners are razor sharp!

On the back cover, there is an arrival date of “11-4” written in blue pen on the upper right-hand corner. Although it’s very minute and unobtrusive, I actually appreciate it because it gives the book “character” and differentiates the “Professor Pecora” copy from any other CGC 9.8! It’s definitely an “exceptional” copy that perfectly represents one of my favorite covers in all of comics! I will cherish it for a long time to come!

In closing, I won this pristine beauty during a Pedigree Comics Grand Auction in April of 2020! I was very blessed to end up with the winning bid and I’m looking forward to watching it appreciate in value each year! 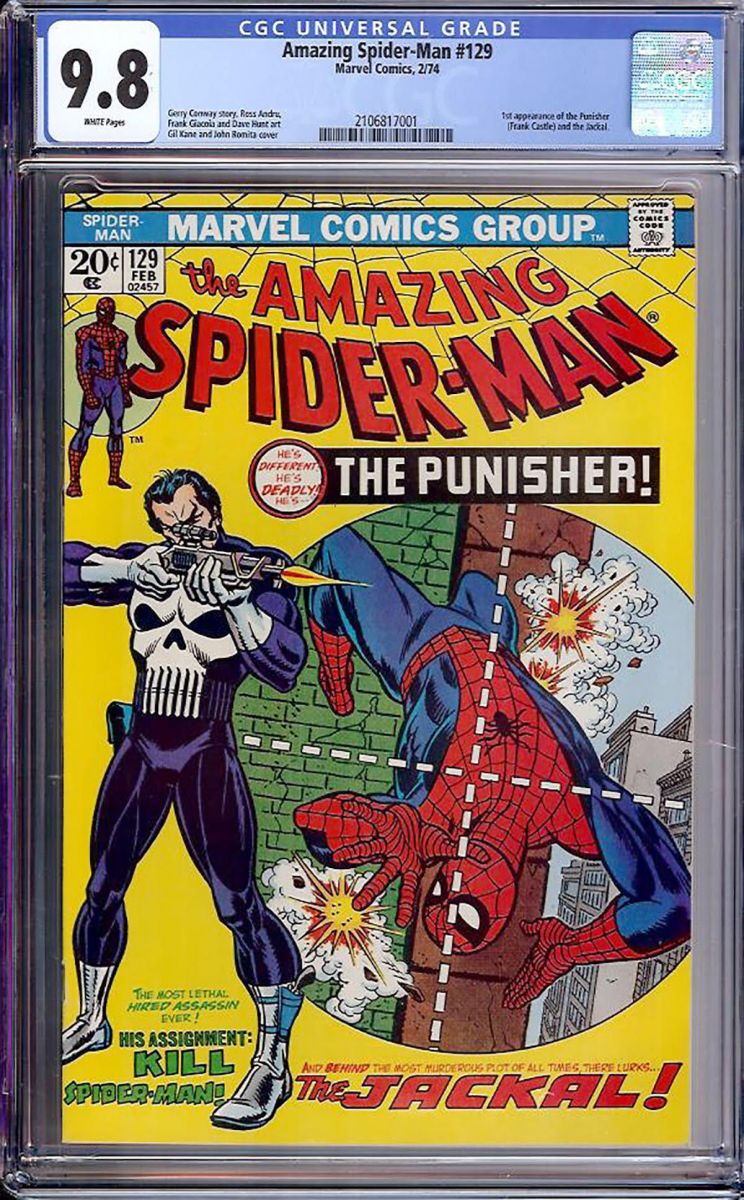 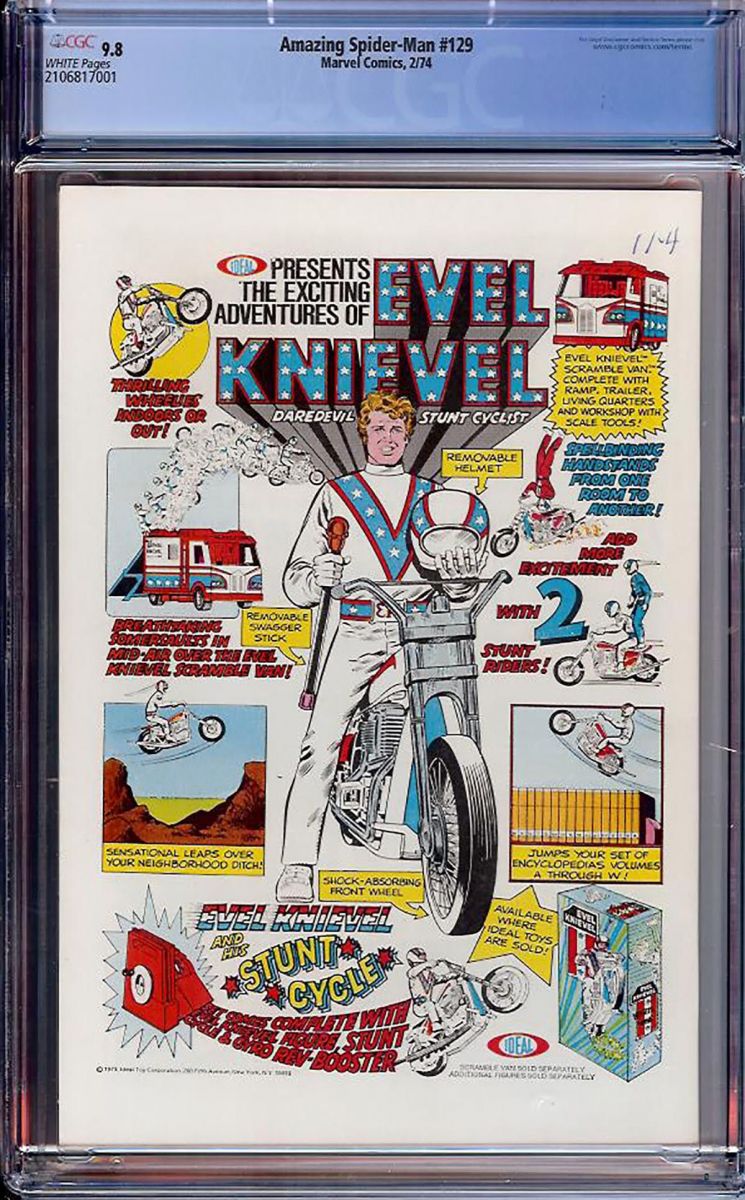